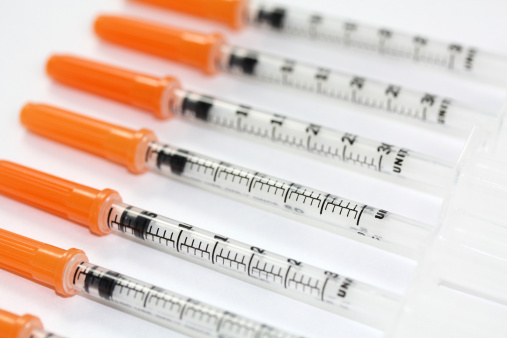 Diabetes in the United States has been exploding, increasing from 26 million in 2010 to 29 million in 2012 alone. More than 200,000 people under the age of 20 have been diagnosed with diabetes.

Here is a quick overview and refresher of the different types of insulin now in use to treat diabetes.

Three types of insulin – NPH, glargine, detemir – are background or basal insulin, acting continuously for up to 24 hours. These types are absorbed slowly.

The other four types are known as mealtime insulin because they are fast-acting in order to counteract the sugar a person ingests at mealtime. They also wear off quickly.

There is also a combination-type insulin, which mix the longer-lasting types with the fast-acting types. Manufacturers claim that this type of insulin delivers the best of both worlds, but the likely effect is that it takes effect later but has a stronger peak.

One type of this combination insulin is known as 70-30, which is70 percent NPH insulin and 30 percent regular insulin.